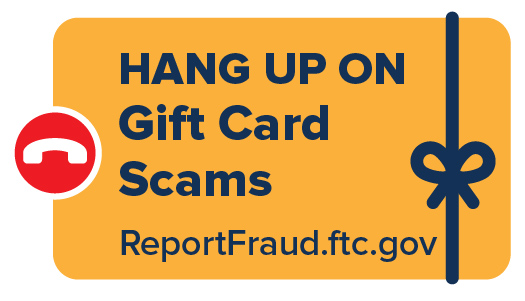 Gift Card Scams are on the Rise

Gift card scams are on the rise. According to the Federal Trade Commission (FTC), nearly 40,000 consumers reported losing $148 million in gift card scams. This undoubtedly represents a fraction of the problem. Fewer than 5 percent of gift card scam victims actually report the crime to law enforcement, according to survey data from the FTC.

How does a gift card scam work? The scam can include receiving a phone call from someone claiming to be from a government agency, like the Social Security Administration, a utility company, or the IRS. The caller warns that your bank account will be frozen for an investigation and tells you to buy gift cards to avoid getting arrested. The caller can also claim to be from Amazon, claiming that there is a security breach on your account, and the only way to fix it is to purchase gift cards and send the caller pictures of the numbers on the back of the card.

The amount of money that people are losing is also increasing. In 2018, the median amount victims lost to a gift card scammer was $700. This year, the amount has increased to over $1,000.

Older people are more susceptible to the scams according to the FTC. Of Americans aged 50-59, 19% of fraud reports involved gift cards or reloadable cards. For Americans age 80 and up, that number jumps to 30% of all fraud reports. Many of the victims become fearful and purchase the cards in the heat of the moment after hearing that their accounts may be frozen.

The scammers often specify which gift cards to buy and where to buy them. According to the FTC, Target topped the retail list. Thirty percent of the victims who obtained Target gift cards during a scam reported losing more than $5,000. Other popular cards among the scammers include Google Play, Apple, eBay and Walmart.

It is a mistake to assume individuals are savvy enough to avoid getting taken advantage of by a scammer. In the heat of the moment, it’s all too easy to get flustered. After all, it can be terrifying to hear your bank accounts could be locked, or you could be arrested.

How to Avoid Gift Card Scams

Some retailers are training their employees to spot distressed customers who are purchasing gift cards, and some stores are posting signs warning their customers about gift card scams. During the busy holiday season though, employees may not notice.

The best way to avoid gift card scams is to remember that no legitimate business or government agency will demand gift cards for payments. If in any doubt, hang up. Here are the warning signs of a scam caller:

Training in the Country

Years of experience and research within the private sector and the military have resulted in the most cutting-edge, research-driven service that the protection industry can deliver.
Contact Us Now